Backpacking in the Desolation Wilderness 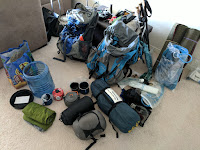 Mary and I went backpacking in the Desolation Wilderness September 14-16, 2017. It had been a while since we've been backpacking, so out first issue was to make sure we had all our gear. Everything we needed seemed to be in working order. We would be spending most of our time around 8000', so we packed extra cold weather clothing. In typical fashion, we brought along more than we really needed, but I guess we got extra exercise!

We were planning to hike from Echo Lake out to Heather Lake and spend two nights there. We heard there were a lot of pikas around Heather Lake! We would do a day hike on the day in between. The trail is part of both the Pacific Crest Trail (PCT) and the Tahoe Rim Trail (TRT). We've only been on short bits of the PCT before, and this would be our first time on the TRT. Unfortunately all the reserved permits for the area in question (zone 33) were booked. We would have to take our chances with a walk in permit. 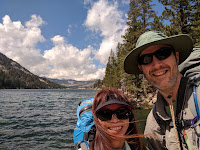 We got a decent start, leaving the house by 8am. We made a quick stop at Subway to pick up a sandwich and another stop at the Pacific Ranger District to get a permit. Luckily we were able to get the permit we wanted! We arrived at Echo Lake around noon.

We lucked out again, finding a parking space just up the hill from the trail head. We decided to eat our Subway sandwich before hitting the trail. After lunch, we made a quick stop at the facilities by Echo Chalet and were on the trail around 1pm. 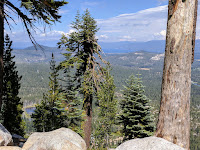 The trailhead is between Echo Chalet and Lower Echo Lake. After a short climb, there's a 20 yard detour to see Lake Tahoe off in the distance (photo on right). We got back on the trail and started following it along the shore of Lower Echo Lake. The trail climbs a bit more, and soon we were looking down on the lake and the cabins along its shore. After a mile and a half, we topped out at about 7600' and made a bit of a descent towards Upper Echo Lake. 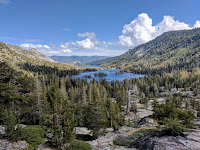 After 3 miles, we were past both Echo Lakes. As we started to really climb out of the basin, we looked back to see the lakes we were leaving behind (photo on left). We were going to climb to about 8300' over the next 2 miles or so.

About halfway from Upper Echo Lake to Tamarack Lake, we passed into the Desolation Wilderness (photo on right). Even though it's getting late in the season, we were happy to see a number of wildflowers. Most notable were Indian paintbrush, larkspur, tiger lilies and columbine. In the forested areas we saw a variety of mushrooms as well. 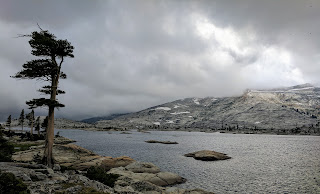 As we approached Lake Aloha, we kept to the PCT. We wanted to get to Heather Lake with enough light left to set up camp. Also, the skies were starting to look a bit ominous (photo on right) and the wind was picking up. Half way along Lake Aloha, it started to rain a bit. We got out our rain jackets and wished we had ponchos to better cover our packs.

Once again we lucked out as the rain never came. We made it to Heather Lake a little after 6pm. There are only a few suitable campsite at Heather, and the first one we came to was occupied. That one was right on the train, so we were fine with missing out. We managed to score a prime spot near the lake under some pine trees.

We set up camp and went to look for pikas. We found one in the dusky light, and watched it scurry around the rocks for a while. As the light faded, we headed back to camp to start on dinner. By the time we filtered water and boiled some for our dehydrated meal, it was dark. We ate dinner and drank hot chocolate in the glow of our headlamps, then cleaned up and hit the tent as the temperature started to drop. 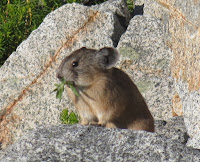 Morning at the lake was quite beautiful. Before breakfast, we went in search of the pikas again. We saw a couple of them, and watched them enjoy their breakfast. They would zip over to a plant, pluck off a mouthful, run back to their rock of choice and proceed to munch. After watching them for a while, we had our own breakfast, which consisted of oatmeal with nuts and dried fruit and some instant coffee with biscotti! After cleaning up, we packed some supplies for our day hike and set off from Heather Lake around 10am.

The trail follows close to the shore of Heather Lake along a rocky slope. We're sure there were tons of pikas in the rocks, and did see one while we were chatting with some other hikers. It's a little less than a mile to Susie Lake. We passed a small patch of snow along the trail. Susie Lake was like a mirror as we passed along its shore. We circumvented the lake and continued along the PCT until we reached the turnoff for Half Moon Lake.

Half Moon Lake Trail is a 2.2 mile spur off the PCT. It climbs some 240' into a bowl containing the lake. We passes a couple of large ponds along the way, each time mistaking them for the lake. When we did finally reach the lake, it was considerably bigger than we expected. The lake must not get a lot of traffic as much of it was overgrown. We bushwhacked our way though for a while, but gave up about half way around. We stopped beside the lake to have our lunch. 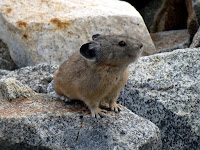 After lunch and relaxing by Half Moon Lake for a bit, we hiked back to Heather Lake. We reached our campsite around 4pm. We had some new neighbors so we chatted with them for a bit. They were not familiar with pikas, so we took them over to introduce them to our furry friends.

After watching the pikas frolic for a while, we returned to our camp and started on dinner. This time we had rehydrated lasagna for dinner. After the lasagne, we enjoyed some hot chocolate with marshmallows and some dehydrated raspberries.

By the time we got to our pika hangout the next morning, our neighbors were already there enjoying the morning light. Once again we enjoyed watching the little critters scurry about for their breakfast. We took our final photos and bid farewell to our neighbors (see video above). We went back to camp to have our breakfast. After breakfast, we packed up and hit the trail around 9:45am.

This time, the sun was shinning as we arrived back at Lake Aloha. When we reached the east end of the lake, we left the PCT and followed the shore a bit further. This section of the lake is really beautiful. It's a lot more forested and we passed a lot of nice looking campsites. In 3/4 of a mile, we took another trail back to the PCT.

As we crossed the rocky slopes above Tamarack Lake, we stopped for lunch. We were hoping to see some more pika. We heard a few of their calls, especially when hikers passed with dogs, but we didn't manage to spot any of them. 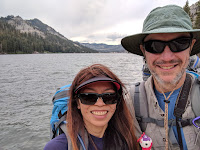 We were getting a bit tired as we hiked the last couple miles along the Echo Lakes. I was wishing that the water taxis were still running this late in the season. We pushed on, taking a few breaks along the way. At a little after 4pm, we were crossing the small dam at the base of Lower Echo Lake.

We had a great time on our little adventure. We learned a few more things about what we should and should not take along. We'll file those thoughts away for the next time we go out, which hopefully won't be too far in the future.

For more photos, check out this Google Photos Album.

In the latest hypraptive post on the BearID project, Kindred Spirits, we announced our collaboration with the Brown Bear Research Network (BBRN). We've also put a call out for photos and videos of bears. 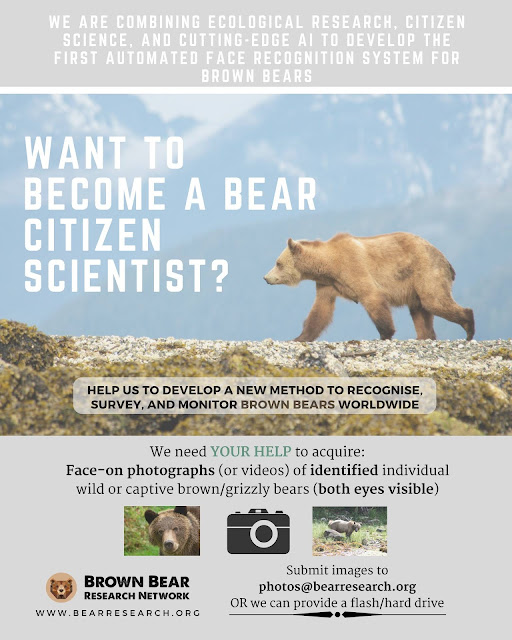 We announced the first complete version of our bear face recognition project, BearID 1.0.

NatHab Photo of the Day

My photo of a red-footed booby was selected by Natural Habitat as their Photo of the Day! 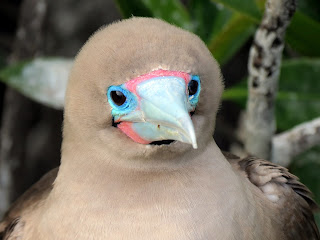 I started working on a new project combining two of my interests: wildlife and machine learning. The goal of the project is to build a facial recognition system for brown bears which can be used by researchers in conjunction with camera traps and citizen science to non-invasively track and monitor populations. The project, BearID, is open source on GitHub and I'm writing about it on the hypraptive blog.