Mary and I went backpacking in Yosemite over the weekend of June 23-24. The trip was coordinated by our friend, Matthieu. We ended up having a group of 10 people for a one night trip to Chilnualna Falls in the Wawona area of the park. This was my first time going on an overnight backpacking trip. 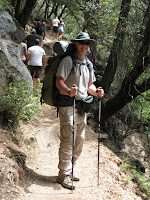 We decided to drive up early on Saturday morning. Mary and I had borrowed some gear from friends, and we stayed up until about 2:30 AM Friday night packing and repacking our gear in various backpacks. We got up at 4 AM after a whopping 1.5 hours of sleep. We picked up Chris and Ashley to carpool to the park. We were the first to arrive at the Wawona ranger station.

Once everyone arrived, we got a couple bear canisters and drove up to the trail head. After various adjustments and vying to be the last person to put on a pack, got on our way (that's me in the picture on the right). The first half mile of the trail is fairly steep. You can see Chilnualna Creek for most of this section, and after the climb, we arrived at a nice cascade with a nice pool at the base (see picture on top left). 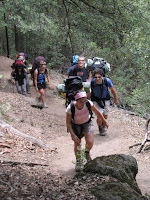 The pool was pretty crowded and we had a ways to go, so we continued on. After a short time we reached a trail junction where the foot trail meets up with the stock trail. From here the trail was a bit less steep, but there were a lot of switchbacks and it was a fairly warm day. The trail veered away from the creek for the next couple miles. It was tough going, especially for a few of the beginners who had "over-packed" for the trip. On the left you can see Leire, Francesco, Chris, Ashley, Mary and Patrick coming up the trail. We stopped for lunch under the trees along the path. Everyone was happy to have the break, but it was tough to get everyone going again. 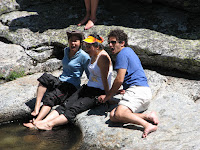 After many more switchbacks and a few more breaks, we made it back to the creek. We stopped here for a long time soaking in the cool water, refilling our water bottles and resting in the shade. The picture on the right shows Karen, Maggie and Francesco enjoing the cool water and hamming it up. It has been a pretty dry year, so there wasn't much water in the creek. I seem to remember much more impressive falls a few years ago when Mary and I day hiked here with our friend Steve. Of course that was a particularly wet year and we were there at the peak water flow. Fortunately, the camping area wasn't too much father. After a couple creek crossings we found a large area with a fire pit right next to Chilnualna Creek. We rested for a bit then set up camp. We had various dehydrated meals for dinner, needing only to add a couple cups of boiling water. The food is pretty good. As the sun was setting, we started a camp fire. On the left is the group sitting around the fire. From the left, thats Chris, Ashley, Maggie, Matthieu, Patrick, Karen, Francesco, Liere, and Mary. Mary and I were the first to turn in having only had 1.5 hours of sleep. I slept like a log. My all-time best night's sleep camping. 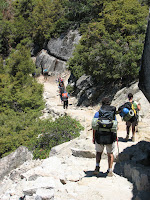 The next morning Mary and I woke up because we were baking in the tent. We had somehow managed to find the only spot without good shade. Eventually everyone else was up, and we all had breakfast of oatmeal and such. We explored the creek a bit, topped off our water and broke camp. The hike down was much easier as you might expect. Thank goodness for gravity, or as Francesco said, "Thank God for Newton." We didn't take many breaks on the way down, but we did stop for lunch on a huge log next to the trail. We also stopped at the lower pools again (pictured at the top left). We got back to the cars in the early afternoon and decided to head over to the Mariposa Grove to see the sequoias. 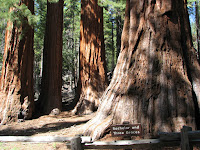 The lot at the grove was full, so we had to park near the South park entrance and take the shuttle up. The bus had AC, so it was quite comfortable. We hiked around the grove for an hour or two then took the shuttle back to the cars. On the drive back to the Bay Area, we all stopped for diner at the Black Bear Diner in Gilroy. It's a pretty good restaurant. We arrived back home pretty late, showered and went straight to bed. It was a pretty fun trip. I think I'd like to do some more backpacking in the near future, maybe in Sequoia...

Patrick and Karen's photos from the trip are here.
Posted by Ed Miller at 1:44 PM No comments: