Mary and I went backpacking in Sequoia over the weekend of July 28-29. This time it was just the two of us. We wanted to test out our new gear, including: 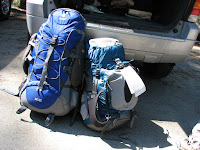 We weren't able to reserve permits for the trail we wanted (Lakes Trail), so we'd have to get there early and hope for the best. We left home around 5 AM and started the drive to the park.

We got to the Lodgepole Ranger Station around 9:45 AM. Only 7 of 25 permits had been assigned so far, so we were able to go for the Lakes Trail. The trail is around 6 miles each way with about 2200 feet of elevation gain. It passes 4 different lakes with campsites and toilets at two of them. Our goal was the 4th lake, Pear Lake. 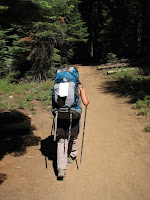 We set off from the trail head at Wolverton at around 10:40 AM. The weather was beautiful as we hit the trail and entered the forest. The first part of the trail makes a steady climb up a moraine deposited by an ancient glacier. The trail heads up to a ridge along the Tokopah Valley. From the ridge you can see the Lodgepole Visitors Center. Continuing along the trail we saw a log with some amazing orange mushrooms growing on it's side. At about 2 miles we reached the junction for the Watchtower/Hump Trails. We choose the Watchtower Trail. 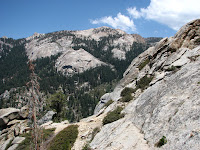 The Watchtower Trail is slightly longer than the Hump Trial, but it is also flatter. That aside, it also provides some spectacular views. We stopped for lunch near the top of the Watchtower and had great views of the Tokopah Valley. We should probably have eaten a better breakfast because we were both starving by the time we stopped for lunch. We scarfed down our sandwiches and tomatoes in no time. Man did that taste good! I was a bit confused about the Watchtower, because the picture in the trail book was from the bottom, but we were at the top. 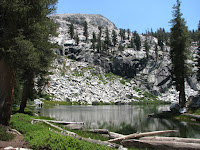 The trail followed along a cliff. There were more stunning views of the Tokopah Valley and Tokopah Falls (though there wasn't any water flowing at this time of year). A bit further along, at about 4 miles, we reached the first lake, Heather Lake. The banks of this lake are lined with red heather and various other trees and plants. We saw a few people swimming and a few more fishing. There's no camping allowed at Heather Lake, but I think it would make a great day hike destination. 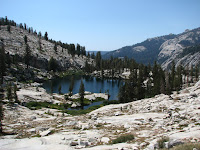 From Heather Lake the trail heads up another ridge. We were keeping our eyes peeled for marmots and pika as they are supposed to be numerous along this part of the trail. Maybe they're not very adventuresome during the hottest part of the day because we didn't see much. We did spot a pika or two darting among the rocks, but didn't manage to capture any with the camera. After crossing the ridge we had a great view of Aster Lake. Emerald Lake at mile 5 is not visible from the trail so we decided to save it for tomorrow and continued on. 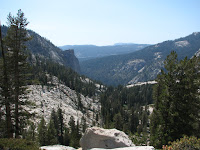 We had one more ridge to cross to get to Pear Lake. Again we were awarded with some amazing views up the Tokopah Valley and had a better view of the Watchtower (the point just left of center in the picture on the right). There are still a variety of flowers in bloom along the trail. We saw a few hummingbirds buzzing about along this section. After crossing the ridge we arrived at Pear Lake around 4 PM. 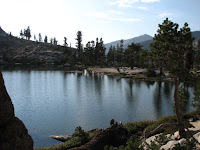 Upon arriving at Pear Lake we looked around to find a good campsite. The campsites here are numbered and you are only allowed to camp in a numbered space. We eventually settled at site #2 just across the small creek. They also have a couple compost toilets set up here which sure beats ducking behind a tree. We set up camp, filtered some water and started on dinner. Dinner was a bag of dehydrated beef stew. It wasn't too bad. Our new stove worked reasonably well. 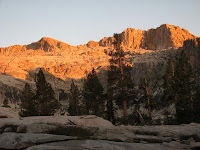 We watched the shadows from the setting sun slowly creep up the Pear Lake basin. There was a nice alpen glow on the looming Alta Peak (picture right). There are no campfires allowed here, so we decided to turn in. I had a bit of a headache either from the altitude, dehydration or both. It made it difficult for me to sleep. I don't usually sleep all that well out camping anyway, but this was even a little worse.I did managed to doze off a bit over the course of the night. We were up again by 7:30AM. 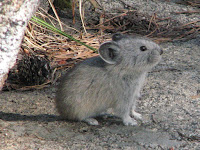 Breakfast consisted of oatmeal and instant Vietnamese coffee. We had a few morning visitors including a marmot, a very cute pika (picture left), and a brave little golden-mantled ground squirrel. We had hung most of our gear in trees because of the warnings that the marmots like to chew on your salty gear. Fortunately the marmot we saw was eating a more natural diet. We enjoyed watching our visitors for quite a while, then finally packed up camp. After topping off our water bladders we were ready to head back out. 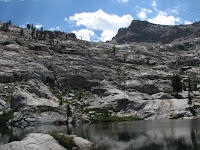 The hike out was much easier since it was mostly downhill. We really enjoyed the awesome views of the lakes and valleys. This time we took the short detour to see Emerald Lake, and it was worth it. I think Emerald Lake is even nicer than Pear Lake, and there are camping sites and a compost toilet there as well. Next time maybe we'll camp at Emerald Lake instead. We never did walk down to Aster Lake, but we had some nice views of the trail. 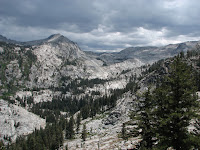 We saw more day hikers fishing and swimming at Heather Lake. Before we rounded the ridge by the watchtower, we took one final look back up the Tokopah Valley (picture on left).

The only real excitement on the way down was a loud crash that made us both jump. A small tree fell across the trail about 30 yards in front of us. It made quite a racket, but was easy to get around.

I made a map of the trail we took at Gmaps Pedometer.

Epilogue: We both really enjoyed this hike, though it was a bit more challenging than we thought. I guess we never give the altitude enough consideration. This was my first trip to this sort of altitude with a full pack. We were mostly happy with our new gear, though Mary had problems with her pack. The strange waffle pattern on the shoulder straps bruised her collar bone. She will most likely return it and try to find another one. It also seems that the BearVault BV350 may be a little small, so we may upgrade it to the BV400. Thank goodness for REI and their liberal return policy.
Posted by Ed Miller at 11:28 AM No comments: